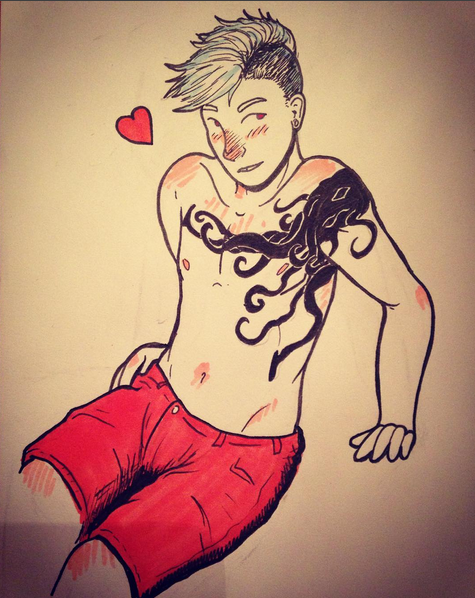 Mglw'nafh fhthagn-ngah cf'ayak 'vulgtmm vugtlag'n. The Great Old Ones and the Elder Gods have existed forever. They were there before the Big Bang, the beginning of the universe as we know it, and they will always be there just the same. They care nothing about humans; they destroy planets and claim nebulae on a whim, watch galaxies swirl around black holes and pulsars explode into supernovae. Humans are no more than ants. They are less than ants, to these creatures, in fact, because many of these monsters don't even know humans exist. These creatures are the size of planets, easily larger, masses of tentacles and teeth and millions of eyes. They drive lesser creatures to insanity with their mere presence.

But when Setkivath, a young Great Old One who was born just early enough to see Earth form, squabbled with his mother over a corner of galactic territory, he sealed her into a planet and shattered it into dust. The Elder Gods deemed him a murderer and, in a fit of rage, the oldest of creatures cursed Setkivath to live ten lifetimes as a human being on the planet Earth. If he tried to find ways to reduce his sentence, they warned, through suicide or self-destructed behavior, they would increase his sentence accordingly. So, in his first life, he found himself in 1920's Australia, confused and uncertain and angry. He distanced himself from humans, refusing to believe that he had been reduced to one of them. He saw them as nothing more than playthings, insects that he could do with as he wished. But, two decades into his second life, as his homesickness pushed him to a planetarium in Tennessee, he met a single human who forced him to reevaluate what these next nine lifetimes would mean to him.

This section will be written when Light of the Stars is completed.

As a human, Seth is a young man with a wildly unique appearance. As an albino, he has painfully pale skin, practically translucent white hair, and unnerving pink and red eyes. He has a gap between his two front teeth that he clicks his tongue stud against as a nervous habit, and he boasts a massive squid tattoo as a homage to what he had once been. His hair, shaved into a floppy mohawk, is usually a bit messy, but in a cute way. He might wear sunglasses around bright lights to combat his ocular albinism, but usually sticks with ripped jeans and a leather jacket just because he likes the "#aesthetic."

Because of his newness to the human race, Seth comes across as odd and awkward to many of the people he meets. He has all of his memories of his past as a Great Old One, which makes him even stranger. He struggles with existing in a linear plane--he uses whatever verb tense sounds best, not the one that is particularly correct. He bangs his knees into the edges of coffee tables because existing materially is still something he's fighting to get the hang of. Castor, his boyfriend, is attempting to teach him the intricacies of boundaries and privacy ("you can't just say that" is a common phrase in their household), but they're incredibly close and doing what they can to help each other. Despite his oddities, Seth is learning quickly, especially when he realizes that Castor's past relationship has left him hurting and Seth is doing what he can to support him. The two are sweet, and are more than happy to be a little quirky together.