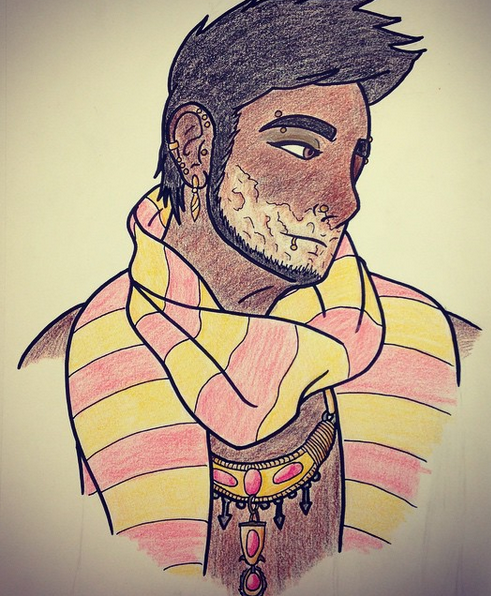 Tucked away in the northern deserts of Saudi Arabia is a rebellion: a population of almost 750,000 people who have created their own country. An isolated community due to the Syrian Desert, these people have declared their territory Kajistan and attempted to break away from Saudi rule, citing "irreconcilable differences." Needless to say, it didn't happen without bloodshed.

Karim al-Din was born to Fahd and Tathi al-Din in eastern Kajistan, and for his first six years he lived a simple life isolated from cities, cars, and technology. His mother is an incredibly accomplished healer, and people would come from miles around asking her to mend their wounds and nurse them back to health. His older brother, Abbas, had the uncanny ability to make grass and crops grow in even the most parched of deserts, and he would be the family's downfall. Months after his little sister, Shahira, was born, Abbas was executed for practicing witchcraft, and the family fled the start of a brutal civil war and headed to America. Karim later learned that he has the power to manipulate fire, a fact which would come back to bite him when a young Karim lost control of his abilities and left his face permanently scarred.

When Ricky and Karim first meet, Karim is the owner of the beautiful flower shop on Ambrose Street of New Dunham, a California coast city known as "the poor man's San Fransisco." He starts off as cryptic and mysterious, but as Ricky returns to the shop, more and more sides of Karim are revealed--a little bit of playfulness, a little bit of wisdom, a little bit of insecurity. As furious as Karim is when Ricky turns up to the shop drunk, the two of them have managed to make a sort of aquaintance. Almost.

But when a terrifying black-eyed monster traces Ricky's scent to Karim's shop, the two of them are thrown together into the fight of their lives. The monster, known as the New Dunham Ripper, has been slaughtering mages like Karim all across the city (New Dunham is the mage capital of the world, with the highest rate per capita), and the creature has now set his sights on Karim. Ricky, despite not having a shred of magic in his genes at all, has been dragged into this fight whether he wants to be or not. Karim is determined to make sure that Ricky comes out of this alive, and finds himself slowly falling in love with the blond art teacher fighting against alcoholism. As the story goes on, Karim begins to overcome both his fear of his own powers and the insecurity surrounding his face. He's nervous about entering his first relationship after breaking it off with his fetishizing and abusive ex-boyfriend, but it helps keep his mind off the fact that there's a serial killer on his tail. After he and Ricky finally defeat the Ripper, he finally gathers the strength to step out onto the sidewalk by his shop with his face uncovered for the first time. Later that summer, he and Ricky move in together, and Karim proposes in early autumn. While both Karim and Ricky both have insecurities to overcome, the two are a blissfully happy couple and Karim is more than happy to have someone who will call him beautiful whenever he wants to hear it.

Karim is stunningly beautiful, and he damn well knows it. He puts an inordinate amount of time into his hair and makeup, never allowing himself to be seen in public without flawless contouring and eyeliner. He wears dozens of bracelets, necklaces, rings, and anklets at once, and has no less than nine piercings in just one ear. While most of this stems from insecurity over his burn--he wears a scarf around the lower half of his face while out and about--he just knows that he looks absolutely amazing and is more than happy to flaunt it.

While he may be just as vain as he is beautiful, Karim is also an incredibly wise and gentle man. Having been through his share of hardships, he always knows exactly what to say, even if it may take a while to word correctly because English is his second language. Despite the fact that he dropped out of high school, he as the intellgience of someone decades older and is more than happy to help out whenever he can. But he doesn't exactly fit the stereotype of the sagely foreigner--he has a pet cat that he adores to bits, he sings along to pop music on the radio, and he knows that his native language makes his husband all blushy so sometime's he'll slip into it on purpose just to see him squirm. As Ricky can attest, when Karim wants something, Karim gets something, and both of them are more than okay with this arrangment. Karim is an extremely high-maintenance partner, but if you manage to make him happy, you'll get more than you ever expected in return.