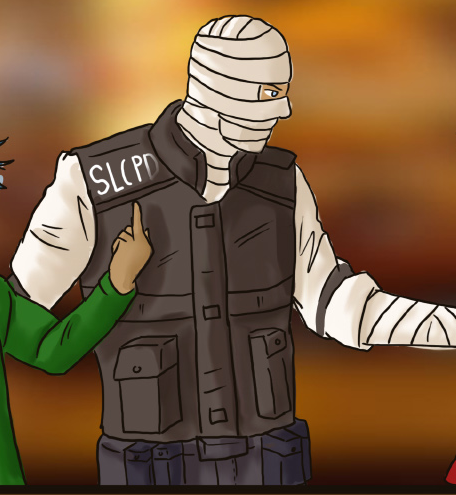 NOTE: Joshua Graham, in his unaltered form, is a character belonging to Bethesda Studios who stars in the Honest Hearts DLC of Fallout: New Vegas. I love the character immensely, but I found that the story surrounding him wasn't the best one for his character. I decided to create the plotline that I believed would give Joshua's character the most potential and the most opportunity to shine. So, many, many biographical details have been heavily altered.

Born in the post-apocalyptic town of New Canaan in the year 2237, Joshua Graham had always lived a rough, harsh life full of dangers and violence. Deathclaws and mutated bears roam the wastelands, and raiders and bandits ambush travelers in the dead of night. The Grand Canyon and the land of Zion surrounding it were somehow untouched by the devastation of nuclear war, and as his parents deemed it an act of God, his belief only strengthened into something that he would always carry with him.

Raised as a devout Mormon, Joshua had always believed in God and the good things he can do--so when he turned nineteen and it was time to go out into the Mojave wasteland to spread the word, he happily accepted his calling. Along the way, he met a man named Edward Sallow, who was obsessed with a man named Julius Caesar from a time long, long gone. The young Joshua abandoned his faith to accompany Edward on his quest for power, and the two quickly became known as Caesar and the Malpais Legate--two terrifying men capable of leveling cities with their bloodthirsty troops. But after Joshua's first failure after years of loving and serving Caesar, the man turned his back on him, deeming him a failure. Joshua's punishment? To be covered in pitch, set on fire, and thrown into the Grand Canyon. When he miraculously survived the fall, he reclaimed his faith and led the people he had once abandoned to safety at the town of New Jerusalem.

When Malcolm and his sister Shea first arrive at New Jerusalem, Joshua is a silent and enigmatic man serving as both mayor and sheriff. His deputy, Daniella, helps keep the scouts in line when Joshua's chronic pain flares up; the town doctor, Connie, is the one who eases the agony of his burns and keeps him on antibiotics and his feet. When Malcolm approaches the odd mayor to borrow his books of Shakespeare, the two end up chatting and even enjoying each other's company. Even Malcolm's mutated turkey buzzard, Donalbain, seems to have taken a liking to the man, even if Shea comments that it's probably because Joshua smells "like death." Joshua happily accepts Malcolm's company, and does what he can to make the siblings feel at home and welcome in New Jerusalem.

But when Caesar catches wind of Joshua's whereabouts, the scorned ex-lover orders his army to seal off the entrances to the Zion Canyon and sweep every inch of the hidden valley for any sign of Joshua and his people. Malcolm and Shea become trapped in New Jerusalem, and Joshua struggles to keep the civilians of his town calm and safe. As Joshua slowly falls in love with Malcolm--a gentle, nervous soul--he finds himself at odds with the town preacher, who is quick to decry him as harming the town he leads, and the ghosts of his past who are doing everything he can to reveal Joshua as the monsterous Malpais Legate. Legends of the Burned Man, the creature Joshua had become after falling from Caesar's favor, spread like wildfire across Caesar's troops, and paintings to appease him crop up between the pillars of stone that make up the canyon. In order to protect his town, he must reveal his past as Caesar's lover and right-hand-man, leaving the town wary and untrusting--that is, except for Malcolm. And when Malcolm is captured by Caesar's Lanius Legate, Vulpes Inculta, Joshua has to repair his reputation with his people in order to both rescue Malcolm and end Caesar's reign over the Mojave once and for all.

After the death of Caesar, Malcolm and Shea decide to stay in Zion, and Malcolm stays by Joshua's side as his husband. Joshua sometimes finds himself worrying that he's keeping the younger man from doing what he wants in life, but the two are quite happy and managing the best they can in their post-apocalyptic world.

Because of the extensive third-degree burns covering the majority of his body and the bandages he uses to keep the burns sterile, the majority of Joshua's physical features have either been destroyed or obscured. His most defining feature (beside the fact that he is covered in old bandages head to toe) are his bright blue eyes. Many people tend to assume that, because of this, Joshua was once blond, but he was actually a dark brunette. He wears leather shoes and a Salt Lake City Police Department bulletproof vest, and washes his clothes every other day.

Joshua is a calm, collected, and devout man, capable of keeping it together even under the most stressful of circumstances. His coldness has gained him the respect (and fear) of those around him, but these days he is a quiet and solitary soul. He loves to read and spends the majority of his time either down at the shooting range teaching the young'uns or reading his copy of the Book of Mormon. While he is a very religious soul, he feels like living in a post-apocalyptic world is punishment enough for our sins and that all those around him are saved whether they mean to be or not. He disapproves of missionary work, but still holds sermon for those who want to attend out of ritual. Despite his oddity, he is a good (if not slightly distant) husband to the younger Malcolm and treats him as well as he can in the world like theirs.