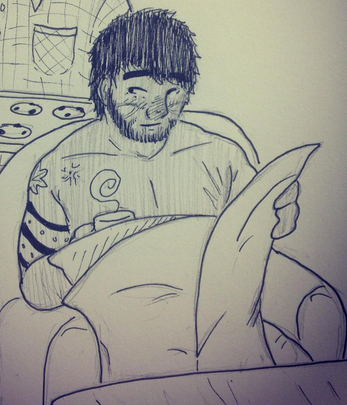 The chance meeting and subsequent affair between a travelling Nepalese businessman and a conservative, traditionalist Inuit woman was never meant to result in a son--and when the man found out he was going to become a father, he stayed on the northern island country just long enough to name his child before grabbing the next flight back to Nepal. The mother, on the other hand, hurriedly married the next man she got her hands on.

Being raised in a tradtionalist Inuit village came to aid Isha's family when the world fell into its next Ice Age, plunging global temperatures rendering large swaths of the world uninhabitable. When the entirety of North America decided to become a single political and economic entity to avoid mass starvation and anarchy--along with lowering the military recruitment age to 16--Isha left his conservative village to become a soldier in the North American Army. Stocky with both muscle and fat as insulation against the cold, Isha's strength, hardiness, and stubbornness caught the eye of Commander Ajingari Raja. As soon as Isha was under his command, the men and women under him splintered off into a ruthless mercenary group, with Isha rising to Ajingari's second-in-command.

When we first meet Isha in Deadpoint, he is a silent and mysterious tailor who had recently moved into an empty cabin on the outskirts of the Alaskan town of Burdown. Rumors swarm around him, and he seems content to let them stay that way. It just so happens that a man named Lon Briggs needs to have his old leather jacket fixed, and, despite seeing Isha's rude brusqueness firsthand, seems to have decided that all the man needs is some friendly company. But when a mysterious man appears in town, wearing a leopard-skin coat and bright purple pants and offering a million dollars in exchange for the entire town (and the oil underneath it), Isha realizes that he man he barely managed to escape from has managed to track him down after all.

The man, revealed to be Ajingari Raja himself, murders the mayor of Burdown and establishes himself as supreme dictator, and Isha struggles to escape the man's watchful eye. As Isha slowly realizes that he's far lonelier than he ever thought and Lon is very sweet and quite handsome, Ajingari manages to unearth him and out him as a traitor, deserter, and genocidal maniac in front of an entire town that had always been wary of Isha in the first place. After barely managing to escape execution and almost exposing his and Lon's relationship, Isha's past--the monster he had once been--is slowly revealed, and as he clings onto his new identity, he has to gather the courage to rely on Lon to protect him and those around them from the man lording over their town. After Isha manages to alert the North American Army and have Ajingari arrested and executed for war crimes, he's left with a gap in his consciousness that he slowly realizes was fear and paranoia...and that gap, even more slowly, is being filled back up with some mental illness he's been left to struggle with. He accepts Lon's marriage proposal only months later, realizing that he doesn't want to lose Lon to anyone else, and he finally manages to settle down into the calm, safe domestic life he deserves. Lon makes cookies for him.

Isha is an absolutely massive man. He may not be tall, but his entire body is solid muscle protected by a layer of what Lon affectionately calls "blubber." He has several tattoos: some are traditional Inuit tattoos, while others are more modern black ink such as the spirals down his upper arms and his seven-pointed leaf. He also has a host of scars, including a massive patch of scarflesh where he was shot in the stomach. His hair is thick and coarse, and he constantly forgets to shave.

While Isha looks intimidating, he's usually not in the slightest. He keeps to himself and likes to embroider beautiful patterns in scrap cloth, and large gatherings tend to tire him out so he stays home most of the time. He's extremely introverted, sometimes to the point of seeming rude and hermitic, but those close to him know that he's easily overloaded and has admittedly sub-par social skills. Lon also knows that Isha loves it when Lon plays with his hair and it makes him sigh like a big, happy dog. While Isha has moments that reveal his past as a brutal and bloodthirsty soldier, he's fighting to put all of that behind him and make sure that he never hurts anyone else again.

After the course of the story, Isha develops a severe case of Post-Traumatic Stress Disorder, as the trauma he was exposed to while under Ajingari's command finally begin to sink in. While he is usually a quiet and muted man, there are days where it becomes increasingly difficult for him to function or interact with the world around him at all. He blames himself for his mental illness and has a very unhealthy relationship with his own emotional health, but he still manages to keep slogging on after the episode passes. Lon is incredibly understanding of it all, assuring him that he's more than okay with helping him through anything he needs help through, whether it's apologizing after a frustrated breakdown or helping him towards the safety of his bed after a flashback. Through everything, Isha is an incredibly strong and resiliant man, and he manages to make a name for himself as a good husband and father.