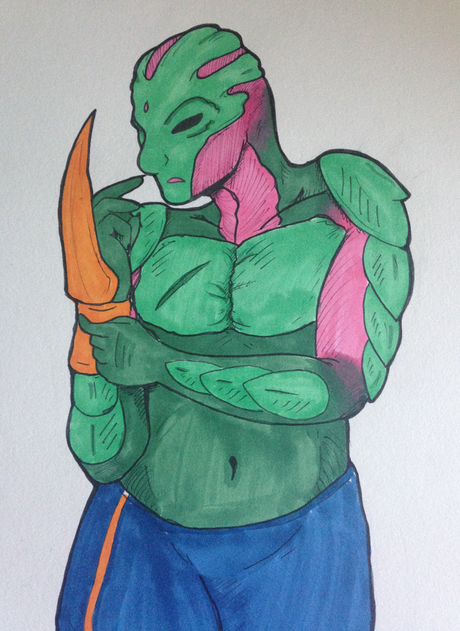 Visiri are a relatively primitive species hailing from the planet Lyrus in the Ouroboros system. Known for their intense creative bent, their unique song-like language, and the sheer non-existence of gender paired with their hermaphroditic biology, this species has only been present on the galactic scene for about fifty years. While stereotypes portray them as promiscuous free-love hippies, the species is more than capable of creating people of all kinds.

Born thousands of miles away from their home planet, Brio Rasa was raised on a far arm of the Citadel space station to the most normal middle-class parents that it could be possible to be born to. This, however, was not Brio's particular cup of tea, and they ran away from home at seventeen to persue a life dabbling in drugs, stripping, and hired killers. Working as a DJ for Chora's Den, a notorius strip club in the Citadel's Presidium Wards, they moonlighted as a paid assassin and lived a generally solitary life peppered with one-night stands and no attachments. Frankly, they liked it that way.

When Brio and Bryce meet, Brio is still working as a DJ at Chora's Den and Bryce is an Alliance Commander on a mission to stop a rouge special agent named Saren. The two meet when Bryce is directed to the DJ by his commanding officer, citing them as a source of information on illegal dealings, underground contacts, and a particularly skilled killer whose skills might be needed for such a dangerous mission. Brio threatens him with greivous bodily harm if he turns them over to Citadel Security, but instead Bryce offers them a job working for the Alliance (albeit between trying to pick his jaw off the floor and awkwardly mumbling because this grown man has a crush on a snarky lizard). Brio agrees to join on the promise of a substantial pay raise--and a chance to mess with the cute Commander.

As figured, nothing goes as planned. What follows would end up being nearly three years of a war against the Reapers, a race of genocidal synthetic aliens whose only purpose is to harvest and eliminate all advanced galactic species. Those three years would involve the two of them causing bets on Bryce's ship on how long it would take them to kiss for the first time, their first "I love you"s coming after escaping from being crushed under tons of falling rubble, Bryce being killed by an enemy ship and resurrected two years later by a pro-human (read: anti-alien) organization called Cerberus to serve as their personal figurehead in the Reaper War, Brio accidentally getting pregnant and dealing with their miscarriage-causing genetic disorder, Bryce being imprisoned for an inadvertent war crime, all before finally leading a full-galaxy onslaught against the Reapers themselves. After the war itself, Bryce and Brio happily retire from military life, taking the Council-funded pension and doing what they can to help with the reconstruction effort during the final stretch of Brio's pregnancy and the birth of their child, Allegro Myra Delphinus. Despite the rough years they spent working at the Wards, Brio finds theirself just as happy with a husband and child as they had living a wild life at Chora's Den; after months upon months of fighting for their life, they're more than ready to settle down and not put their life in danger anymore. Still, that's not to say that they won't ruin somebody's day if that somebody crosses their family...

Brio has one of the most common visiri colorations: forest green with a pink throat and highlights. Bryce remarks that they look like a watermelon (fruit-related jokes work with the baby; Brio isn't impressed). Despite that, they're still incredibly eye-catching, with hips that an asari stripper would kill for and enough muscle to give them a pleasantly solid look. Many of their scales are cracked or chipped from years of misuse, and their fashion sense ranges from "sweatpants and sneakers" to "ankle-length dress with a sheer drape and two pounds of jewelry." They look amazing either way.

Just like how their taste in clothes varies, so does their personality. When Bryce and Brio first met, Brio was a deadpan snarker with a mysterious streak, mischevious and dark; however, Allegro grew up seeing their bibi as a strong but gentle protector who treated them well even when they messed up and gave them their old music mixing software as soon as the kid showed an inkling of a love for music. Even when Brio is cooing over their newborn or babbling toddler, they're always ready with a snappy comeback to mothers who decide to get too nosey. They're an enthusiastic, involved parent with more than enough experience on the streets to justify their badass undertones. Their family is more than safe with them.