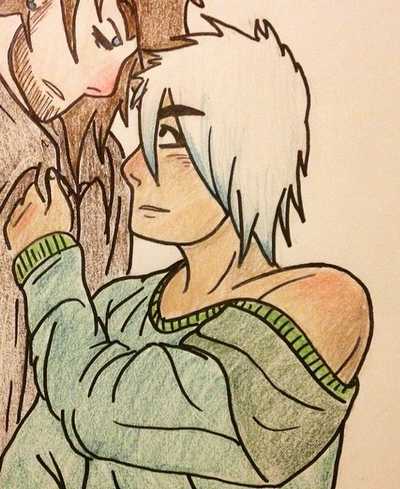 In the Washington city of Glasskill--a grey, rainy city made of nothing but glass and concrete--there is a single law that stands out above the rest: it is illegal to be homeless. If the police decide that they have even the slightest reason, they can demand, of any person, a proof of address. And if the detainee is indeed homeless, they are thrown into what is known among the city only as "the Dregs."

Benjamin Chavez was born in the Dregs to a mother and father who had never known anything but the broken, desolate, and abandoned city blocks that surrounded them. Growing up, he rarely ventured beyond the chainlink fence (that opens and closes precisely at 5am and 5pm every day) that cut off the Dregs from the rest of the world, and attended a school with no running water and two textbooks per classroom. Despite the hardships he faced--the death of his mother and father, his choice to leave his grandmother in order to make things easier for her, the years he spent sleeping on a mattress in an alley, and turning to the comfort of random men from shady clubs just outside the Dreg walls--he took solace in his only friend, Kit, a hyper fox who is quite possibly the only person capable of keeping Benny in line. Benny is also the last of a long line of necromancers: despised sorcerers capable of crossing the heavily-guarded line between life and death. If you need the dead raised, a demon summoned, or a ghost calmed, Benny is the Dreg rat to talk to.

Benny and Declan meet under what most would call "not the best of circumstances." Declan is at the end of his rope looking for a sorcerer who will be able to help find his brother who went missing in a demon-related incident, and Benny's first words to him are: "Contrary to popular belief, gringo, I'm not actually a prostitute, so unless you're here for something else, fuck off." That is, until he actually sees Declan, when he changes tract to: "I take that back. I'm sure we could work something out, big guy." With this wonderful introduction, Benny--who is homeless in the middle of Glasskill's rainy season--demands to stay at Declan's house until Declan's brother can be summoned. Declan sees no other choice, and agrees to let the little rat into his apartment.

However, things go very wrong very quickly. It turns out that Declan's brother, Kurt, has actually been dragged down to Hell and has been slowly turning into a demon during the near-decade that Declan has been looking for him. When Declan's mission turns from rescuing his brother to getting revenge on the demon that dragged him down in the first place, Benny finds himself along for the ride and doing whatever he can to track down the monster he's only heard of in the cautionary tales of necromancers. As Declan's parents reject him and the two are forced to come to terms with their pasts in order to find one of the most powerful demons in existence, more and more of Benny's backstory comes to light--and Declan finds himself wanting to protect the babyfaced teenager that had propositioned him on a street corner. Benny finds himself actually falling in love with Declan, the random guy that gave him a couch for the week. After Kurt is freed the best he can--from his bonds, not from Hell--and the demon Baphomet is dead, Declan makes Benny promise to stay and gives him a place to stay. Benny is kind of (definitely) a little shit, and when Declan's friends come over he likes to embarrass him, but the two really are close and care about each other a lot. Benny can be difficult and he's still adjusting to the fact that he doesn't have to hoard food to survive, but Declan is willing to help him through the rougher patches of adjusting to life outside of the Dregs.

Benny is a scrawny young man who has been left short and permanently stunted from almost two decades of never getting enough to eat. His dark brown eyes are almost black in dim lights, but they're almost always glittering with some sort of mischief or hare-brained idea. He has a scar across his stomach from where he uses his switchblade to draw blood for his spells and rituals, but eventually he covers it with a sugar skull/fox tattoo after promising to set his terrifying powers aside. His hair is dyed white with blue streaks--for years, he had used industrial bleach and blue Kool-Aid before Declan demanded that he start using proper hair products instead. He always wears shirts and coats at least two sizes too large.

As for his personality, Benny is quite honestly an impressive handful. He likes to swear just because it's fun and make incredibly crude comments to fluster or straight-up inconvenience his boyfriend--or whenever the fancy strikes him. For the longest time, he was a heavy smoker, and now that he lives with Declan it took him over two years to quit because he couldn't admit that he needed some sort of help. His stubbornness gets in the way of a lot of things (he refuses to hand over the chips during movie night, and Declan has to sneak them from him when he gets distracted), but it was traits like this that like him survive being homeless from four years and surviving in the Dregs for all the others. He's bullheaded, confrontational, loud, and demanding, but when you really get to know him, it turns out that there's a soft, squishy center. It's not like Declan calls him "squish" for no reason, after all.