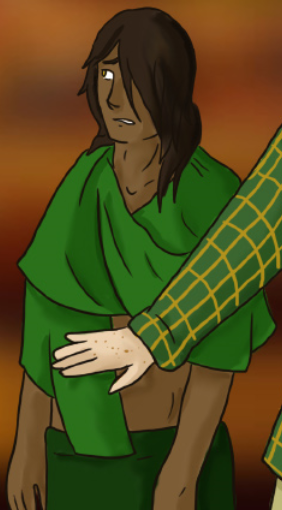 In the world of Yoreand, there exist gargantuan, lumbering monsters known as Colossi. They have existed for as long as their world, walking in straight, unbreaking lines and dumbly destroying everything in their path. Heralded as gods of destruction and new beginnings, the humans of Yoreand have built their world around them: permanent structures are laughably arrogant, so every building is constructed on a platform capable of being moved by massive teams of horses or through magic. Maps of ocean shelves are meticulously detailed, for a Colossus traversing the ocean only to surface and capsize a ship in the middle of nowhere is the stuff of nightmares.

One Colossus, though, was created from Yoreand's mountains around five hundred years ago with an extraordinary trait: the ability to transform into a human. Since his age is still in the triple-digits and Colossi routinely live to be 50,000+ years old, this Colossus--Andromedon--is still considered an infant, and he spends his days exploring his forest and exploring the ruins of old civilizations. As one of the few Colossi with the capacity to think and reason, Andromedon has taken this to its extreme. An omniglot capable of speaking seven languages (most, if not all, are dead languages where he is the sole surviving fluent speaker) and a love of all things literary, this young Colossus is a treasure trove of forgotten knowledge.

Andy's very first interaction with humankind was not a particularly welcoming one: Mason Comerford, the resident monster hunter of the Yoreand town of Spalding's Keep, managed to wound his leg in what is revealed as the first instance of a human wounding a Colossus in recorded history. After hiding away in an ancient Colossus temple to tend to his wounds, the second interaction goes much better. A young man named Russ, lead to Andy by his faithful dog, strikes up a timid friendship and brings him home to more properly nurse him back to health. While initially mute and painfully shy, Andy slowly comes out of his shell as Russ opens up to him in turn and encourages him to let the people around him know what he needs. As Andy has never really been around humans before, he clings to Russ for comfort and reassurance.

As Mason Comerford boasts his feat around town, something slowly comes to light. Not only was Mason the very man who wounded Andy in the first place, the man is a Beastmaster: a person capable of overtaking the mental processes of any creature and bending them to his will. The man begins targeting the Brandt family and harassing them, as Russ and his siblings' mother was a Shio demon and so they must know something about Colossi, right? Mason wants nothing more than to finish off the Colossus he injured and become the first man to ever kill a Colussus, unknowing that the creature he hurt is right under his nose. Despite Andy's delicate nature, he ends up forced to confront Mason indirectly when the man turns another, larger Colossus towards town in a misguided attempt to show just how dangerous these creatures are and how he should be allowed to continue on his quest. Thankfully, this is one of the hardest things Andy faces; after Mason is killed to protect the town, Russ and Andy are free to happily live together in the large house at the edge of Spalding's Keep. Andy is less scared of humans these days, and will happily revert to his Colossus form to help plow the fields or let young children climb on him as a playground. Russ sometimes has to help him talk to people at the market or understand the intricacies of kissing (which Russ is more than happy to help walk him through), but Andy is quite happy with his human life full of ideas and inspiration.

Andy is a small young man with little to no muscle definition and a soft stomach, his skin traced through with thin veins of molten gold as a reminder of the creature he is. While he has no ethnicity as he is intrinsically inhuman, he has come to the conclusion that his human form most closely resembles the indigenous people of the area he was created. He keeps his hair long, mostly worn loose and covering one side of his face to hide his missing eye. He wears a long green skirt and shawl and sometimes puts flowers in his hair because he looks absolutely adorable.

The boy is also an extremely gentle soul, as soft as a feather resting on a dew-covered spider web. His voice seems incapable of rising above a whisper, and Russ has a running list of things that make him cry (this list includes "somebody offered him a sample at the grocery store" and "the salsa maker is scary"). This subdued and demure temperment makes him a natural with animals, and he seems to slowly collect them wherever he goes--by the time he and Russ are married, the Brandt property has three horses, two goats, a sheep, a few chickens, a dog, and an eel, not to mention all the fish in the koi pond. As sweet as he is, he still has some trouble fitting in around town, as this is his first foray into experiencing society first-hand. As awkward as he can be, he's truly sweet and precious and deserves all of the hugs.

Plot of Legend of the Colossus inspired by Shadow of Colossus.