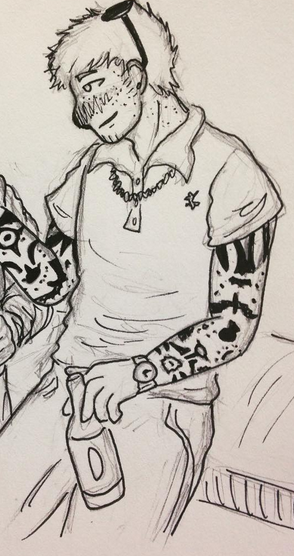 The fabulously wealthy Ricci family, hailing from the plush and affluent neighborhoods of San Fransisco, boasts an unbroken line of sons: Derek, Gareth, Jared, Harris, and Aaron. The youngest of them all, Aaron has always struggled with his position as the "baby" of the family. However, with a weekly allowance of $2,000 in middle school and full access to his father's Centurion Card, it's hard for him to find a reason to complain.

Born with a silver spoon placed firmly in his mouth, Aaron has always had the luxuries of life at his beck and call. Dinners at country clubs, weekends on his mother's private yacht, playing with the most advanced civilian weaponry at his father's shooting range, and calling a watch more expensive than most cars his "backup," he doesn't really have much in the way of room to complain. His brothers have jobs as stockbrokers, lawyers, and CEOs of wildly successful companies, so Aaron decided to go in a different direction: to film school. Harboring a deep-seated love of movies, spurred by memories of lounging in his private theatre and browsing his father's extensive collection of movies, he found himself determined to start his own studio--on his father's dime, of course.

At the beginning of his story, Aaron is a giggly and enthusiastic teenage boy celebrating his spring break on a tropical island with his college friends, smoking weed and getting drunk and griping about his clingy golddigger boyfriend back in San Fran. On that very vacation, one of Aaron's friends dares him to ask out the cute guy manning the poolside bar. Egged on by the tune of $500 in cash and the THC seeping into his system, Aaron does just that...and to everybody's surprise, it works. The cute bartender is Thomas Greenwald, an awkwardly tall and scruffy man with a wonderfully deep voice and a tendency to ramble about whatever comes to mind. The two hit it off, if not a bit oddly, and they schedule a date for later that evening.

But something goes very, very wrong. When a missed turn on the island leads them into the path of a group of ruthless modern pirates, their island vacation spirals into a bloody hellscape. Kidnapped and held for ransom by Malika Lahai, a teenage drug lord who rules over Hiala Island with an iron fist, Aaron and Thomas are forced to join the natives of the island in retaking their ancestral home. Aaron finds himself taking to this violent, adrenaline-rush life like a duck to water. Recalling his time at his father's shooting range, Aaron becomes a force to be reckoned with, his mental stability waning as he becomes more and more violent and prone to outbursts of murderous rage. Over the course of the story, he falls so far down into the rabbit hole that, in sudden moments of clarity, he becomes terrified to return to civilization for fear of what he's become. After the island is liberated, Aaron decides to remain on the island for two more months in hopes that he can pull himself back together before heading home, leaving Thomas to return to the mainland alone. He eventually returns to Thomas and the two of them finally get to go on their first date, but things have been rough for both of them. Aaron still has violent outbursts and self-medicates his rage by drinking and smoking heavily, and Thomas has been left with crushing anxiety after barely escaping the island with his life. It takes a lot of time, therapy, and patience for the two to function together, but after five or six years Thomas finally proposes. Aaron happily accepts, and the two manage to make it through the best they can.

Plot of Bite the Bullet inspired by Far Cry 3.